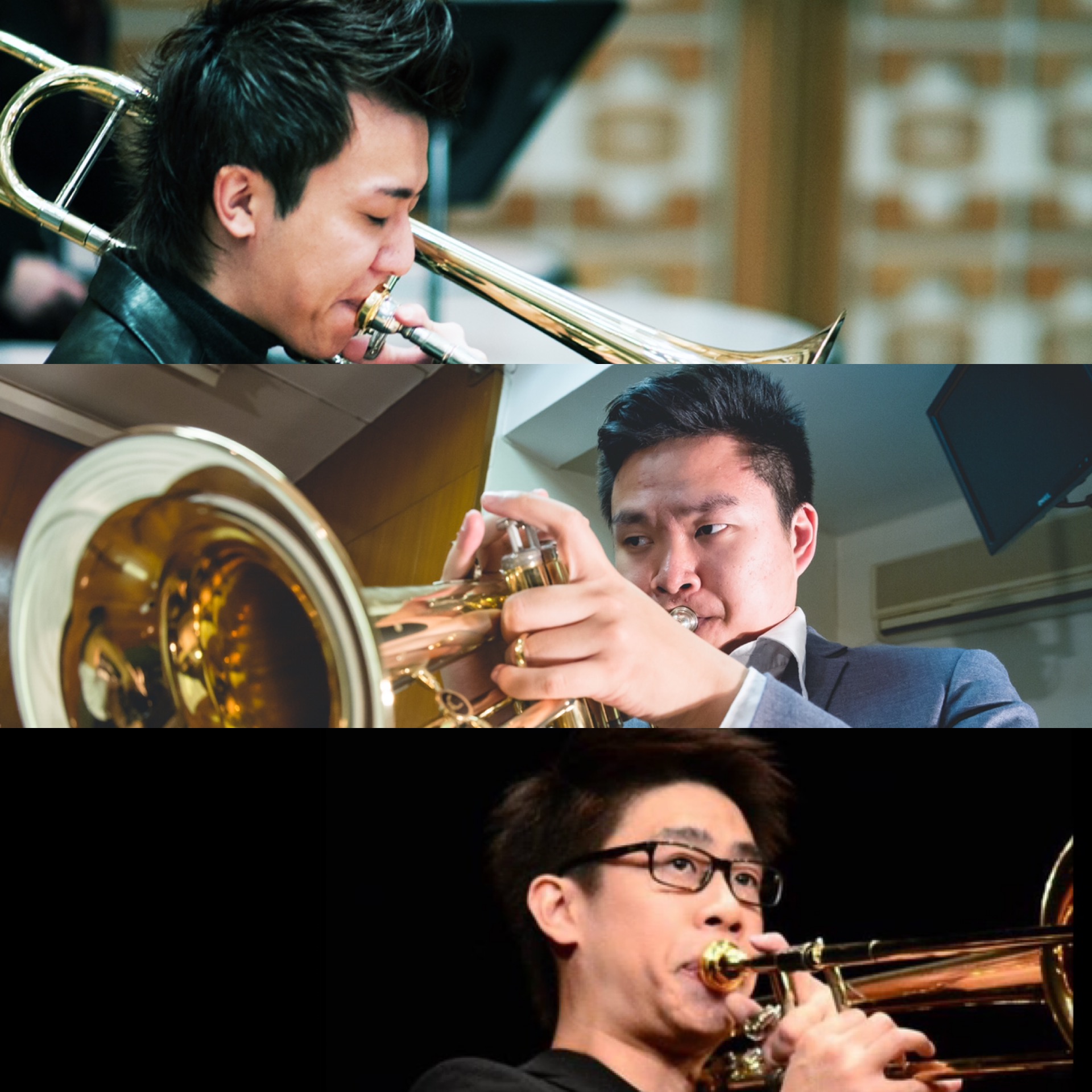 Siu-fai Tony Tsui received trainings on trombone and euphonium from Dr. Raymond Lee since he was 15. In 2007, Tsui entered the Conservatoire à Rayonnement Régional de Paris. Tsui performed with some of the leading groups and orchestras of our time. Upon graduation from Conservatoire à Rayonnement Régional de Paris, Tsui was awarded the Gold Award of trombone solo in 2010. Thereafter, he was appointed as the artist associate of the Hong Kong Festival Wind Orchestra since 2010. Tsui is the music ambassador of Bam Cases Products, music instrument consultant of Tom Lee Music Hong Kong and the music performance tutor of BME programme in The Education University of Hong Kong.  Being the performing artist of Antoine Courtois, Tsui performs on an Antoine Courtois trombone, the Legend AC420BOR.

Keith Cheung started his study of trumpet at the age of 11, inspired by Mr. Tony Tsui. After graduating from Hong Kong Baptist University under guidance of Mr. Joseph Ngan, he studied in Conservatory of Rueil-Malmaison in France. Now, he is pursuing the Master degree of Trumpet Performance in Haute Ecole de Musique de Lausanne in Switzerland with Mr. Eric Aubier.

During his study in Europe, Cheung is keen on participating various musical events. He was invited as guest soloist with the Paul Kuentz Orchestra and Choir to perform a series of trumpet concerti in Paris. In 2018, he is a finalist in Eurocuivres International Trumpet Competition. In Hong Kong, Cheung actively performs with local orchestras and jazz groups. Other than live performances, he participated in studio recording for symphonic works, movie soundtracks as well as Jazz and Pop CDs.

Gabriel Ng started to study the trombone at the age of 14 under guidance of Mr. Li Lap Wang and after with Mr. Tony TSUI, artist of Antoine Courtois. In 2018, NG graduated from Conservatoire à Rayonnement Régional de Paris under tutelage of Mr. Jacques Mauger. During his study in France, he learned from different trombone soloists such as Jean Jacques HERBLIN (CRR de Cergy-Pontoise Trombone Professor), David Maquet (Radio France Orchestra principal trombone), Vincent Lepape and Fabien Cyprien. NG also keen on participating different masterclasses. Ng had participated in many competitions in Europe. In 2017, he won the 3rd place of Clemont-Ferrand International Trombone Competition in France. NG is currently an active trombone teacher in Hong Kong, as well as promoting trombone and brass chamber music. ELIAS is formed by tertiary students who joined the project “Every Life Is A Song HandiSongs: Tertiary Students’ Musical Tribute to Our City’s Craftspersons”, which is organized by Leisure and Cultural Services Department and Every Life Is A Song. In this project, they wrote songs for the craftsperson including the carpenter, tattoo artist, guitar repairman, the mortician makeup artist and so on.  In this performance, ELIAS will be having crossover with the local duo, per se.

per se is a music duo composed of music talents: Stephen Mok and Sandy Ip. The name means intrinsic or in itself, which reflects their music being just music without the limitations and burdens of genre or style. They started by releasing their debut EP in 2013 and have since released 2 concept albums Conundrum in 2016 & ends in 2018) revolving around the puzzles of life and different ends. This year, per se has started on a new music project Ripples, reflections and everything in between to discuss the differences of how each person views and values time using historical events as song inspirations. To compliment that, the project was launched as a Calendar and new songs will be released on the same day as when these historical events occurred. In recent years, per se played at Hong Kong music festival Clockenflap and were also nominated in Taiwan’s Golden Indie Music Awards “Overseas composer awards”. They are going to hold their debut concert at Music Zone @ E-Max on Oct 5, 2019. 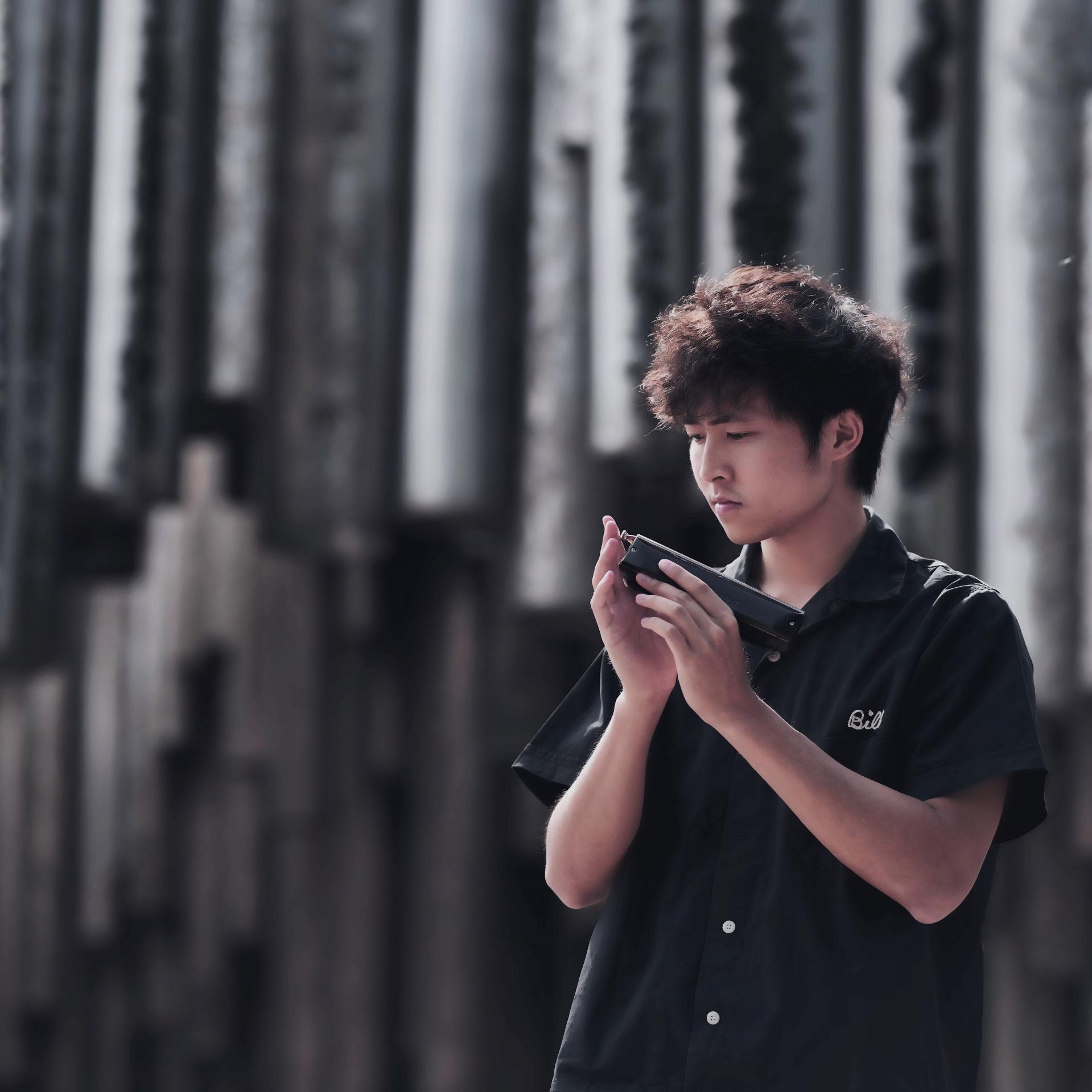 Leo was always destined to become a harmonica player from a tender age, influenced by his father PC Ho, the founder of the Hong Kong Harmonica Association and the world renowned King’s Harmonica Quintet. He won his first international award as a harmonica soloist at the age of 10 at the Asia Pacific Harmonica Festival. By the age of nineteen, he had accumulated 17 international titles including becoming Solo World Champion twice at the World Harmonica Festival 2009 & 2013. In 2018, he was invited to perform in the one of the world biggest music events NAMM Show 2018 in California, United State.

Back in his home town of Hong Kong, Leo is no stranger to the mainstream music industry. He has collaborated with many A-list local artists including Sandy Lam, Lowell Lo, Hacken Lee, Leo Ku and Louis Koo. Recently in 2017, Leo’s recording attracted extensive recognition when it appeared in the movie ‘This Is Not What I Expected’ starring Takeshi Kaneshiro. In Lowell Lo’s concert, ‘Beyond Imagination’, at the Hong Kong Coliseum with over ten thousand concert goers, Lowell lauded Leo on stage as ‘the best harmonica player in the world’.

Leo has also participated in many local indie and high culture music activities. He has appeared at two of the biggest music festivals in Hong Kong including the 32nd Hong Kong Arts Festival and Clockenflap 2016. Being widely recognized as a classical musician, a jazz musician and a singer-song writer, he has achieved recognition in a great number of musical activities in Hong Kong. His unique stories often attract media attention.

Recently in 2017, Leo was invited to launch and direct the first Hong Kong City University harmonica team. His mission is to promote, develop and advance harmonica playing and performance in Hong Kong. As a member of the Veloz Harmonica Quartet, Leo has often appeared in community promotion projects and major government events such as performing at the National Day reception. Leo is also currently the international endorser of Hohner music.